A road map to the U.S. hydrogen economy highlights the need for investment, policy development and govt/private industry collaboration 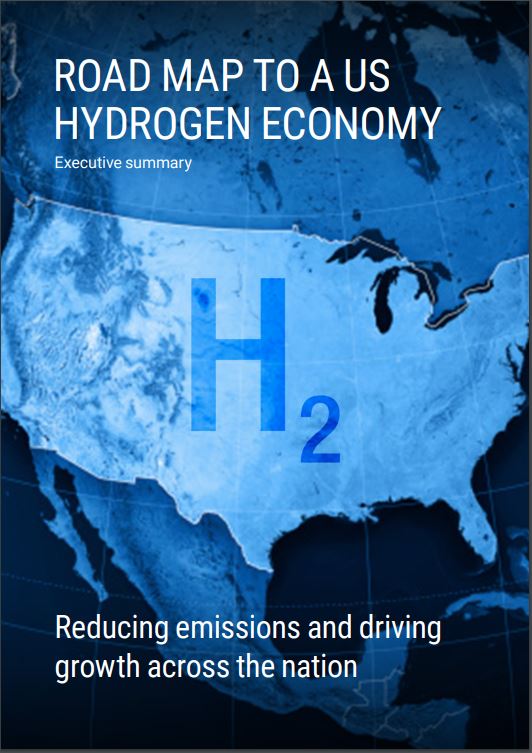 Eighteen private-sector companies released a road map to a hydrogen economy in the United States, calling for nine policy and programmatic actions that are needed to develop and expand several hydrogen-related markets.

By 2030, the road map, Road Map to a U.S. Hydrogen Economy, estimates that the “hydrogen economy in the U.S. could generate an estimated $140 billion per year in revenue and support 700,000 total jobs across the hydrogen value chain. By 2050, it could drive growth by generating about $750 billion per year in revenue and a cumulative 3.4 million jobs.”

The executive summary of the report was recently released in California, the center of hydrogen and fuel cell activity in North America. The full report will be released in the near future.

“California has been at the center of hydrogen and fuel cell activity in the United States for many years, but now we are seeing the beginnings of activity in other states,” said Bill Elrick, executive director of the California Fuel Cell Partnership.

“Our members recognize that a hydrogen society cannot be fully realized throughout the U.S. unless we have a partnership of government, investors and the private sector, each of which will play a unique and significant role.”

The development of the hydrogen economy road map was aided by the Electric Power Research Institute (EPRI) which contributed scientific observations and technical input, and McKinsey & Company which provided analytical support. EPRI’s 2018 National Electrification Assessment called for exploring the role of hydrogen as a clean energy carrier. McKinsey & Company previously assisted the Hydrogen Council in developing its road map, Hydrogen, Scaling Up.

The first action in the road map calls for establishing decarbonization goals that are dependable and technology neutral, describing it as “setting the north star.”

The road map recommends needed incentives and support, including infrastructure development, ensuring a kickstart to various hydrogen-related markets. The road map also calls for systemic changes that include research and development, the harmonization of technical codes and safety standards, and other efforts that pave the way for a hydrogen economy.

“The hydrogen economy road map will assist us in further fleshing out our 2030 vision for California,” said Elrick. “This foundational document builds on earlier work and will help advance California to a self-sustaining marketplace. I think it will also encourage other states to further and, perhaps, expand their clean air and energy goals.”

Nine Actions from the Road Map to a U.S. Hydrogen Economy

To realize this road map, industry, investors, and policymakers need to work together. To unlock hydrogen’s potential in the U.S, nine actions need to happen.